The 2019 Hampshire Care Awards, organised by the Hampshire Care Association (HCA), was celebrated at the beautiful Winchester Guildhall on 15th November.  Each year, this fantastic event recognises the hard work and dedication that goes on not only within Care Homes but also within people’s own homes across the Hampshire region 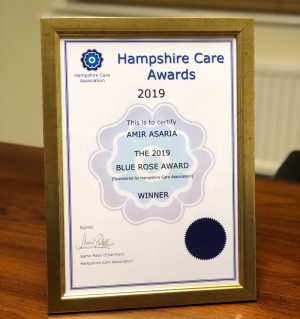 The final award presented this year was the prestigious “Blue Rose Award” which specifically honours one special person or team due to their total dedication and commitment to care and their being an example and inspiration to others.

Chosen by the Executive Committee at the HCA, we are very proud that this special honour this year was presented, with a standing ovation, to our late and very dearly missed CEO, Mr Amir Asaria.

Affectionally known as Mr A, this astute entrepreneur with a natural flair for business became co-founder of the Brookvale Group in 1986 with the purchase of Brookvale House in Portswood in Southampton.

Even from that time, Amir had a vision that was based on creating a home for the elderly where the ethos of “where people matter” ran deeply through its veins. For anyone that ever knew Amir, they would know that he wished to always push the boundaries of excellence, and 30 years after that first foray into the Adult care industry, Amir, as CEO, had nurtured a group of, at one point 12 very diverse and successful homes. 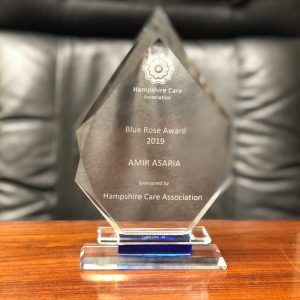 But Amir’s contribution to the industry didn’t stop there. Despite his desire to maintain a low personal profile, he was dedicated to offering advice and support to the next generation of entrepreneurs by sharing his knowledge, inside information and business acumen on a strictly pro bono basis. His reputation for having a strong ethical stance that flowed through all aspects of his philosophy of work meant he was always in demand for his pearls of wisdom.

Dedicated to the Brookvale Group to the very end, Amir suddenly passed away in January 2017. Like the great artists of the past, a person’s true worth is often recognised posthumously.

Mr A’s contribution to the Care Industry in Hampshire continues to hold significance and the knowledge that he has passed down is so valuable.

We are sure he was watching down on us, proud that his memory continues to live on

Any cookies that may not be particularly necessary for the website to function and is used specifically to collect user personal data via analytics, ads, other embedded contents are termed as non-necessary cookies. It is mandatory to procure user consent prior to running these cookies on your website.